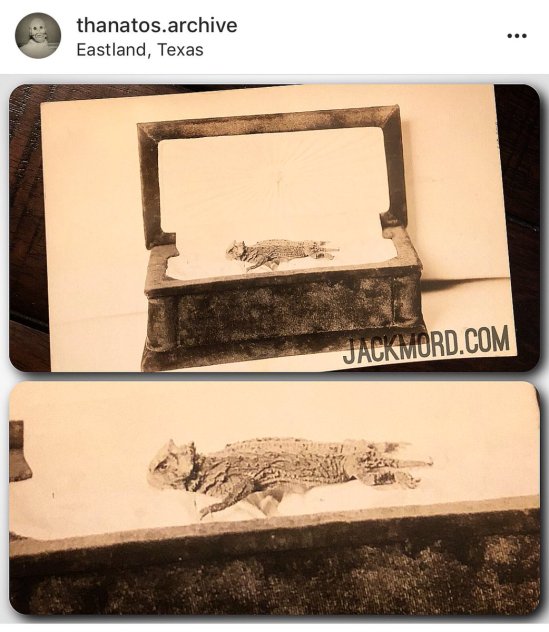 This isn’t just any lizard in a casket, this is Old Rip (named after Rip Van Winkle – keep reading to find out why…), the horned lizard.

OR’s story is a fascinating but sad one. In 1897, he belonged to a 4-year-old boy, the son of a county clerk in Eastland, Texas. In July of that year it was decided to include Rip, who was still alive at the time, in a time capsule that was cemented into the cornerstone of the new courthouse.

Thirty one years pass, and in 1928 the courthouse was scheduled to be demolished, which drew a crowd of over 3000 who came to see the time capsule opened; bets were placed on the fate of Old Rip….. the capsule was cracked open and there was OR… still ALIVE after so many years inside his tomb, in a state of hibernation… healthy, with worn down horns and a broken leg, probably from trying to escape.

Old Rip became a mini celebrity, touring the country, meeting the president and having a write up in Ripley’s Believe it Or Not!

Sadly, only eleven months after he was released from the capsule, Rip died of pneumonia. He was embalmed and placed in the velvet lined glass top casket, as seen in this original 1929 photograph from my collection. Last I heard he is still on display at the courthouse!

Sound too fantastic to be true? Maybe… but apparently there have been many cases of lizards, frogs and other reptiles hibernating for many years. I remember reading some stories about frogs impossibly found inside sealed rocks deep underground, inside coal mines and quarries… even a story about a pterodactyl stumbling out of a rock and trying to fly off before collapsing and dying… (OK, there’s no way that one really happened, but I love it anyway).

Buy Our Book, "Beyond the Dark Veil"!